(Scroll down for biblical discernment resources!)

"Get used to different"
(The Chosen catch-phrase on Dallas Jenkins' sweatshirt.)
Now, stated completely in context, here is the actual interview dialogue within the YouTube video transcript of Dallas Jenkins on the Saints Unscripted video interview.

“So I can honestly say, it’s been one of the top three most fascinating and beautiful things about this project – it’s been my growing brother and sisterhood with people of the LDS community that I never would’ve known otherwise and I learned so much about your faith tradition and realizing, gosh, for all the stuff that maybe we don’t see eye to eye on…that all happened, that’s all based on stuff that happened after Jesus was here. The stories of Jesus we do agree on, and we love the same Jesus. That’s not something you often hear…sometimes it’s like, oh they believe in a different Jesus than we do. No, it’s the same, I mean I’ll sink or swim on that statement. I know that’s controversial and I don’t mind getting criticized at all for the show, and I don’t mind being called a blasphemer, I don’t like it when my friends are. I made it very clear that if I go down, I’m going down protecting my friends and my brothers and sisters and so I don’t deny we have a lot of theological differences but we love the same Jesus.”  —Dallas Jenkins

The non-Christian cult of Mormonism has "another [qualitatively different] Jesus...another spirit...and another gospel."

Paul, the apostle, warned about counterfeit Christian spirituality, masquerading as the real thing, and based upon "another Jesus...another spirit...and another gospel." Meaning, Paul warned about false and unbiblical ideas of "Jesus" that are qualitatively different than the actual Jesus of Nazareth, the Holy Spirit, and the gospel account as found in the Bible.

"Would to God ye could [I wish you would] bear with me [while I indulge] a little in my folly: and indeed bear with me [as you read this]. For I am jealous over you with godly jealousy: for I have espoused you to one husband, that I may present you as a chaste virgin to Christ. But I fear, lest by any means, as the serpent beguiled Eve through his subtilty, so your minds should be corrupted from the simplicity [of your sincere and pure devotion] that is in Christ. For if he that cometh preacheth another Jesus, whom we have not preached, or if ye receive another spirit, which ye have not received, or another gospel, which ye have not accepted, ye might well bear with him [you seem willing to allow it]." —2 Corinthians 11:1-4, emphasis added

The historical Jesus of Nazareth in the Holy Bible is not the same spiritual being as the "Jesus" of the Mormons! In fact, the long-time recognized cultic theology on the Church of Jesus Christ of Latter-day Saints (Mormons) website clarifies this, as does the Holy Bible. The Bible, published nearly two-thousand years previous to young Joseph Smith's occult "visions" and communication with the "angel" Moroni, warned about such impostors like Joseph Smith. The Bible  warns about those who would confuse the historical Jesus  with the counterfeits. Dallas Jenkins is no exception to the rule, and he should know better than to blur theological lines.
The Bible also very clearly warns that we are to "mark," or keep a close watch on those who would bring teaching that in contrary to what the Jesus and the apostles taught.

Now I beseech you, brethren [Christians], mark them [keep a close watch on them] which cause divisions and offences contrary to the doctrine which ye have learned; and avoid them. For they that are such serve not our Lord Jesus Christ, but their own belly; and by good words and fair speeches deceive the hearts of the simple. —Romans 16:17-18, emphasis added

Jan 5, 2022
The [Counterfeit] Jesus of The Chosen - The Chosen Exposed - The Mormon Agenda - Biblical Review
https://www.youtube.com/watch?v=IijbpfCQBnA 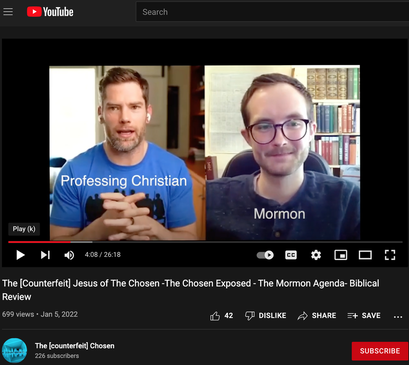 "I said that you, um,
that many LDS folks [Mormons] and I,
uh, love the same Jesus,
I still believe that."
—Dallas Jenkins